Get notifications by email when your door has been unlocked.

Get Notified When Door Is Unlocked: LightBlue Bean/Node-Red

Get Notified When Door Is Unlocked: LightBlue Bean/Node-Red

Get notifications by email when your door has been unlocked. 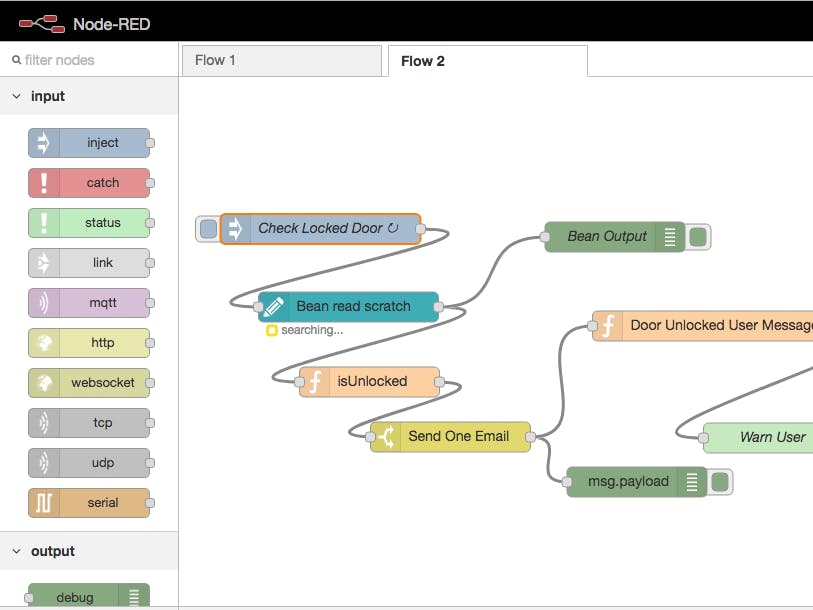 Hello again! In this tutorial I will show you how to easily set up your LightBlue Bean and Node-Red server as a method to send notifications via email when a door has been unlocked during a specific time interval. The main concepts of this tutorial will include:

How It Will Work

The LightBlue Bean will be attached to the standard switching lock on your desired door. Once firmly attached to the door, the built-in accelerometer of the Bean will be used to determine the current x, y, and z acceleration when the door is in the locked position. The acceleration that is being exerted on the Bean is of course due to gravity. These values should be marked down and remembered for later. Then switch the Bean to the unlocked position, and mark down these values for later. Basically in the locked position the Bean will experience an arbitrary gravitational force of "g". When the Bean is in the unlocked position, it will experience a force of "-g".

Some may be thinking this is a kind of hacky solution, but this is a solution that involves not having to buy some fancy new IOT lock just to know if someone opened a door. Likewise, it doesn't involve some circuit that will have to be duct taped to the door frame. Once the Bean has been placed in the unlocked position it will send a scratch characteristic to the Node-Red server telling it the door state has been changed. When Node-Red gets the notification that the door state has been changed (through the LightBlue Bean node), it will send an email to the user. Keep in mind that this may not always be useful as there are certain times of the day where you will know when the door has been unlocked because you are there. This is why an inject node with a time interval is used. That is pretty much it! On to the fun part!

The AccelerationReading class has a property for x-axis, y-axis, and z-axis. To read a specific axis, use: acceleration.xAxis. This is a good time in the tutorial to determine the values of the Bean acceleration in the locked and unlocked position.

Code for determining if the door is locked or not.

The next thing to do is send the current state of the door to the Node-Red server. The function to do this is a method in the Bean class called setScratchNumber. This method takes in a number (the Scratch Number) and a value (the data to send). It is used as follows:

To get a reminder of how to send scratch characteristics and how they work, check out my previous blog: Getting Started with Bluetooth Low Energy using Xamarin, and check out the Arduino Code section. The LightBlue Bean documentation on Scratch Characteristics can be found there as well as how to use it.

Now it is time to move on to the Node-Red part of this tutorial.

In order to not send a million emails when the door becomes unlocked (and stay unlocked), there must be some kind of flag or counter that will be switched on once the door is initially switched to being unlocked. This value should also be reset once the door is switched back to locked position. Due to Node-Red's flow structure it is hard to have any sort of memory within the actual flow without some very shady logic. Luckily, they have already thought about this for us. To add the global variable follow these steps:

As stated before this is important to keep the track of, if an email was already sent or not. If this is not added then Node-Red will continuously send emails as long as the door is unlocked. In the Node-Red code added to this blog (can be found here to be imported into Node-Red) there is a function called "isUnlocked" that takes care of the logic for the email to be sent or not. The value from the Bean's scratch characteristic is a parameter to this function. If the value is 0 the door is locked, if the value is 1 the door is unlocked. The output of the function is 1 if the email should be sent and 0 otherwise. So the logic is as follows:

This logic is found in the isUnlocked node of the flow provided in this blog.

In this tutorial the read scratch node is used:

Open and import into Node-Red the JSON code provided from this tutorial (found here). Notice the node named "Bean Read Scratch". Double-Click on the node to open and see its parameters. In order to work it needs a Bean to be connected to, and scratch characteristics selected to be outputted.

Sending An Email With Node-Red

The last piece of the puzzle is to send the email! Double-Click on the node called "Warn User". The following will pop-up:

I used a gmail account for my application. I filled the "To" parameter with the account I was going to send it to, the "Server" parameter was "stmp.gmail.com" for gmail, and the "Port" parameter was "465". The UserID and Password parameter were just my gmail account credentials. Once everything is filled press "Done" because now you are also done this tutorial! Virtual high-five!

Double Click on the Inject Node called "Check Locked Door" and change the time interval to what you need.

With everything now completed press "Deploy". The LightBlue Bean node will start searching for the Bean specified so make sure the Bean has the battery in it. The code included in this project has a check for if the Bean is connected and turns the on-board LED green when it is (The node itself will also say "connected"). This can be seen in the image below:

My hand holding the bean in the locked position.

In the above image, the Bean is in the locked position and therefore no email has been sent yet. Once I tilted my hand to the right (into unlocked position), I received an email instantly that notified me the door was unlocked, and I only got ONE email. When I first made this flow I sent myself 30 emails because I did not have the global variable. The email is shown below.

The email I received

The tutorial went over the topics of downloading new Node-Red nodes, using global variables in Node-Red, sending emails in Node-Red, and receiving data from the Bean in Node-Red. In addition, the tutorial covered how to read the built-in acceleration of the Bean and how to set the Bean scratch characteristics. If done correctly the Bean and Node-Red will work synergistically to send notifications via email when the designated door is unlocked during the specified time interval. I hope all of you enjoyed my tutorial, thank you for making it this far! I encourage you to leave any questions or comments below. I would more than happy to answer them. Thank you!

4 projects • 19 followers
I am a Mechatronics Engineer. I enjoy learning new software/hardware platforms and then blogging about my experience.
ContactContact