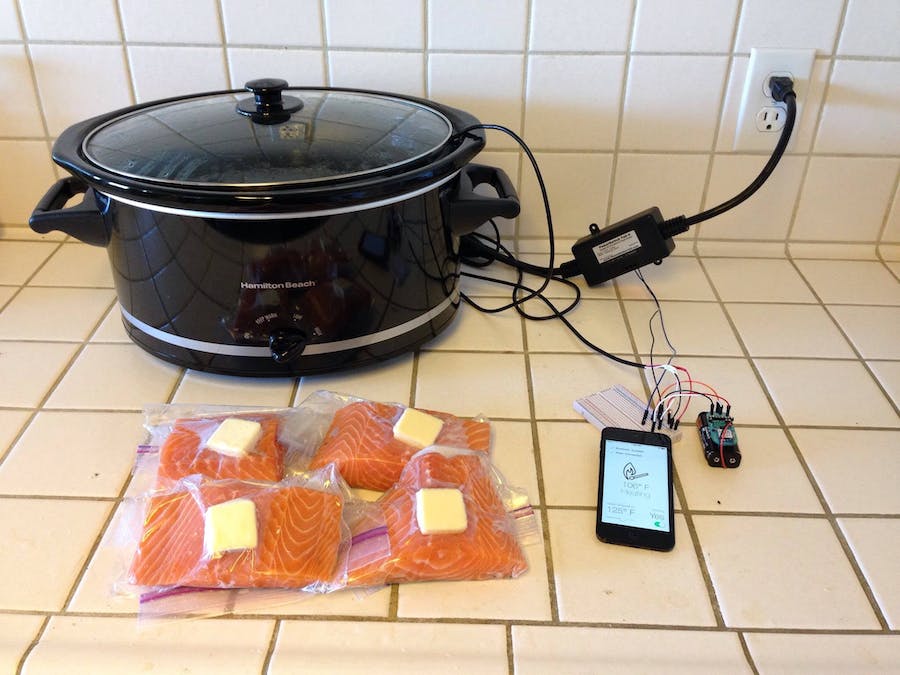 Build a sous-vide cooker with your Bean! Make delicious food and leverage the power of Bluetooth Low Energy to control your cooking experience.

Sous-vide is hot-water immersion cooking. You seal your food in plastic bags and put it into hot water. This keeps the moisture locked in and makes sure meat cooks fully all the way through.

Sous-vide (French for "under vacuum") is a method of cooking food sealed in airtight plastic bags in a water bath or in a temperature-controlled steam environment for longer than normal cooking times at an accurately regulated temperature much lower than normally used for cooking. The intention is to cook the item evenly, ensuring that the inside is properly cooked without overcooking the outside, and retain moisture.

Once you start cooking your food sous-vide, you'll never go back—everything comes out moist and delicious and falls apart on your fork. It's great for cooking everything from salmon to steak to squash.

What do I need?

A LightBlue Bean, of course! This is the bit that regulates the temperature and talks to your phone.

Commercial sous-vide solutions for home chefs (such as the Sansaire) usually include the following:

Instead of a heating coil, this DIY sous-vide machine uses a slow cooker (crock pot) to heat the water and cook the food. Since the stoneware in the slow cooker distributes heat evenly to the contents of the cooker, we won't need to include a water circulator.

We picked a Hamilton Beach 8-quart slow cooker from Amazon. Whatever cooker you use, make sure it's an analog control mechanism—no fancy digital temperature regulators or timers. The Bean is only able to turn the cooker on and off with a relay, and power-cycling a digital cooker will most likely cause it to stop cooking until it's set up again.

This sensor relies on a pullup resistor to enable communication via the 1-Wire protocol. We used a 10k resistor, but most large resistors (>1kΩ) will work.

Finally, we hooked our Bean up to one of the 2xAA battery packs included in the Maker Kit and attached it with a bit of double-sided sticky foam. We connected this because polling a temperature sensor and talking to an iOS device every 5 seconds will quickly drain a coin cell battery.

We'll use an iOS device that supports Bluetooth Low Energy with an app that talks to the Bean and sets the target temperature for the cooker.

How do I get started?

If you'd like to get up and running right away, here are the steps you'll need to follow:

Rename your Bean to SousVide

You'll need to rename your Bean using the OS X Loader App. The iOS app finds the Sous Vide bean by looking for a nearby Bean with the name SousVide—if your Bean isn't named exactly the same, the iOS app won't try to connect.

Alternately, you can change the name that the app searches for inside Sous Vide/Controllers/SVViewController.m to match your Bean instead:

This sketch relies on the OneWire library by PJRC and the Dallas Temperature library by Miles Burton. You need to install those libraries into your Arduino software before Verifying the sketch.

Run the iOS app on your iDevice

Clone this repository and open Sous Vide.xcworkspace in Xcode. Once that's complete, build and run the app on your iPhone or iPod Touch.

The iOS simulator doesn't support Bluetooth Low Energy, so you'll need to have actual hardware to use the app properly. You'll also need an iOS Developer Program account to be able to run the app on your device.

Wire the Bean up

The Bean should be wired as follows:

Power on and sanity check

You can verify the Bean is working properly by running the iOS app and connecting to the Bean. You should connect the temperature sensor and relay to the Bean, but you don't have to plug the slow cooker or the relay into the wall—the relay has an LED that indicates its powered/unpowered status.

You're good to go!

It's worth taking a little bit of time to verify the Bean is able to moderate the temperature of the slow cooker within reasonable bounds—in our experience, the temperature has stayed within ±2°F, but your results will vary based on the cooker you use.

Don't forget basic safety—slow cookers generate heat, so make sure to monitor your setup while you're cooking to avoid any risk of fire!

The iOS app frequently loses connection to the Bean. This won't affect your cooking—the Bean holds the last-set values in memory and continues to use them to regulate the temperature of the water in the cooker.

If you have any questions about this project, the best place to ask is the Beantalk community forum.

All aspects of this project are covered under the MIT License. 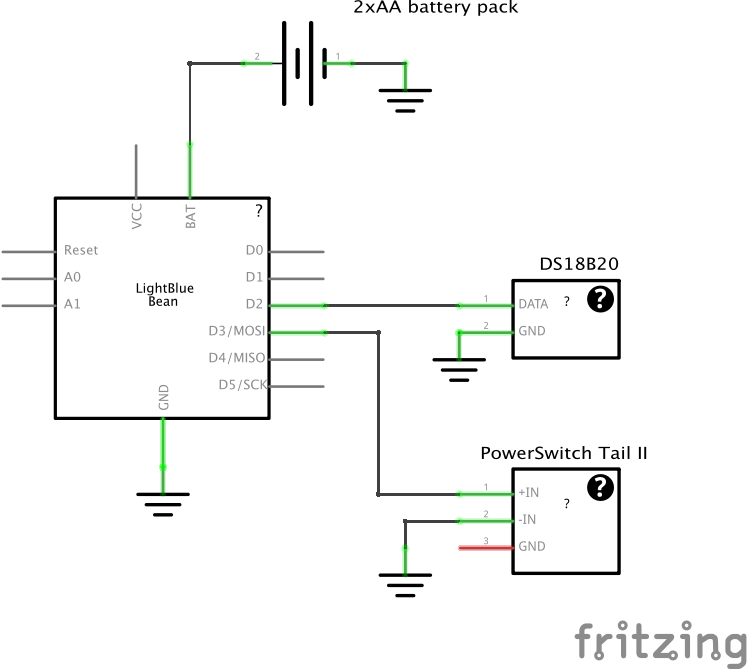 1 project • 3 followers
I work at Punch Through on the LightBlue Bean!
ContactContact